It was the same night as my run-in with “Brisbane” that found me returning to my hotel room quite alone having departed from my comrades at the bar. Having put myself to bed for no more than 10 minutes, it began. The most horrible screaming could be heard from the room next to mine. I was sure someone was being murdered...


And thus  followed a curious series of events. I could hear a man and a woman next door arguing loudly in Cambodian, loud ‘thumps,’ and the woman screaming. Not just any screaming, mind you, but blood curdling “help-me-I’m-dying” screaming. I dressed quickly and hurried out into the hallway, desperate to do something to save this poor woman. But by the time I was out in the hallway, all had fallen silent and I couldn’t be sure if the sound had really come from next door, or perhaps the room above me, or it could have been coming from down the hall. I was uncertain, so I hurried down to the front desk of the hotel. I tried to explain that I had been woken by a couple arguing next door and that the desperate sounds of the woman’s screaming suggested to me that intervention was necessary. The front desk clerk listened to me calmly and patiently. I feared he didn’t quite grasp the severity of the situation.

When I finished explaining, the clerk returned my gaze and calmly explained, “Oh, well, men in Cambodia, they sometimes hit their women.”

I kid you not.

That is what he said to me. Completely and unabridged. As you can imagine, I was somewhat shocked by his reaction.

“Right. So… Is there something… you can… do?” I considered pinching myself to see if this was really happening.

The clerk returned my gaze nonchalantly. Then he shrugged.

Stunned, I decided to return to my room and try to figure out where the commotion was coming from so I could go thump on their door and A) save a woman’s life, and (excuse me for being insensitive) B) tell the fellow to shut the hell up yelling at her because people were trying to sleep. Standing in the hallway outside my room, I tried to listen carefully for any sounds of a domestic disturbance. I turned and noticed that the clerk has got off his arse and followed me upstairs. He too was listening for sounds of a fight. Quietly, we listened together but it seemed the dispute was over. After a while, we parted and I returned to my room, finally dropping off to sleep around 3am but I remained concerned that I would walk down to breakfast the next morning only to find the Cambodian equivalent of crime scene investigators swarming the lobby.

But breakfast came and went without a visit from the local authorities so I could only assume the incident resolved itself. I can't deny this experience really shocked me and more-so the reaction of the clerk at the front desk. His unwillingness to do anything to halt the heinous abuse of one defenseless woman was as though this kind of act perpetrated again women in Cambodia were normal or natural.

Living in Asia (Japan specifically) for the past year and a half has shown me an amazing attitude that still exists in some places in the world towards women that I would not hesitate to call prehistoric. Japan itself, although a modern first world country, is still (for lack of a better phrase and it is taking a lot of courage for me to use this wording...) 'morally under-developed' compared to most other first world countries, especially in terms of feminism, gender equality and women's rights. Women in Japan are still paid much less than men doing the same job and a culture exists so strongly here that women are expected to retire from work after having children and resolve themselves to a life of housework. These are attitudes I have experienced first hand. It is not without hesitation that I use words like 'morally under-developed' but the gender/racial/sexual-orientation prejudice friends and I have experienced living in Japan cannot go unmentioned.

Visiting Cambodia also really made me realize my lucky and privileged my upbringing in Australia.

After bidding farewell to the beautiful warm waters of Sihanoukville...

...the tour group set out on the long drive to the Cambodian border where we would need to wait for our Vietnamese visas to be processed and then proceed to Chau Doc, our overnight pit-stop before moving on to Ho Chi Minh City. As we made our way towards the border, we crossed some beautiful countryside before we had to get out and lug all our baggage 100 metres in the hot sun across the border, wait half and hour for processing, and then board the bus into Vietnam. It was amazingly hot. Aided by near cloudless-ness and intense humidity, the sun was beating down like nothing else. Arriving (finally) at Chau Doc, we relaxed for a few hours before our tour leader called us down to the lobby for our evening activity. Finally, we would get to sample what had been tantalizingly weaving around us for days; we were going to ride mopeds up to Mt. Ha Long where there was a bar from which we could watch the sunset.

At the front of our hotel, before a crowd of smiling gentlemen who were to be our chauffeurs we donned helmets and were assigned to a moped. Passersby looked on in confusion. My driver was a 50+ man who said I shouldn't worry about clinging to his back too tightly (how kind). I assured him of my complete lack of fear by urging him to push the speed limit which he happily obliged. Passing through the markets and narrow streets of Chau Doc by moped was a lovely first experience of Vietnam.  We paused by the roadside occasionally so my driver could point out a catfish farm, a high school, the lovely view of the mountain looming ahead. When we reached the foot of the mountain, my driver asked, "Ok?" I responded "Yes, I'm ok!" so he gunned it as fast as a scooter can go up the steep hill (which was pretty fast actually). Riding a scooter is so common in Vietnam (it is the chief means of transport because the import tax on cars is astronomical), that it really is an experience you shouldn't pass up.

Arriving at the bar on top of the mountain, we were greeted by the most amazing, sprawling panoramic view of the Vietnamese rice paddies and the nearby Cambodia border. So we decided to kick back and enjoy a few cold ones while the sun set...

The next day we piled back onto the bus for the 4 hour journey to Ho Chi Minh City (previously known as 'Saigon' before the war). Passing by quaint little store fronts and restaurants, we really began to understand the importance of the scooter for a lot of families. My record was  a family of 5 riding one scooter.

Ho Chi Minh City (hereafter HCMC) was a meelee of scooters and the odd car or bus. The streets were often jammed, always streaming with vehicles. To cross, pedestrians had to stare straight ahead, pay no attention to traffic come at them from the sides, and walk steadily and slowly into the stream of traffic. Miraculously, the traffic seemed to part (like a red sea?) around street-crossers without incident. Not once did I see a traffic accident the entire time I was there.

Our first day in HCMC found us arriving at the Thein Tung Hotel. I must warn anyone considering this hotel as an accommodation option; my room was filthy! Opening the shower stall, I found hair brushes full of hair, opened/used packets of cosmetics and more! But the real problem was that when I complained, staff did nothing about it for hours until finally (sick of my complaining) they arranged another room for me (but not before a lot of eye-rolling and heavy sighing). DO NOT STAY AT THE THEIN TUNG HOTEL. There, I've said my piece.

HCMC was otherwise a fascinating and culturally rich city. A great place to soak up some history about the Vietnam War at the War Remnants Museum or Reunification Palace; or grab a bargain at the Ben Thanh Market.

Our evening activity included a tour of the city centre by cyclo. A cycle is a man-powered bicycle with a seat attached to the front.

Our guides took us through the city park and then (during rush hour) on toward the beautiful  city post office inspired by French architecture...

In addition, we also visited the church (which you may remember from a famous Top Gear Vietnam Special), the Opera House and the river side area. 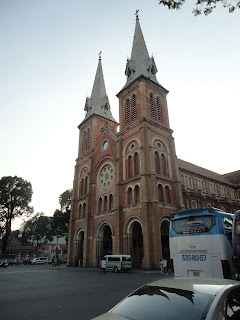 Our guides were so kind and full of interesting bits of information about the city. The cyclo drivers are a part of a dying trade, what with most locals choosing faster public transport options, so tourists are often applauded for choosing this slower tour method. I definitely recommend a cyclo tour of HCMC when you visit.

After dinner and then headed over Bui Vien, a street in the centre of HCMC where locals like to gather on the sidewalks with a beer and watch the many local motorcycle gangs drag race. Sadly, there were no drag races for our viewing pleasure that evening but we were treated to an impromptu performance of "Billy Jean" by a Michael Jackson cosplayer, complete with Michael Jackson dance moves. A few drinks and I was ready to hit the hay.

All in all, HCMC was a pretty vibrant and exciting city for my first taste of Vietnam. I was amazed by the thrum and hustle of the streets. The frustrating part was the constant 'spruking' or shouting of taxi touts and street vendors trying to sell their wares. Some people would follow you (I have no idea why, maybe because you might lead them to more tourists/suckers). So I feel personal security is a risk for lonely travelers. Enjoy your journeys but I always recommend you do so safely by travelling in groups.

Next time on Roaming in Southeast Asia; I visit the Cu Chi tunnels made famous during the Vietnam War, we become the stars of a Vietnamese nightclub, and I take a 30 hour train ride to Hanoi. Join me!

Pin It
Posted by AussieOnTheIzu at 07:40