Pin It
Departing from Siem Reap at 7am brought us to our destination of Cambodia's capital city, Phnom Penh by nightfall. We were exhausted, sweaty and irritable (there is only so much listening to your ipod on repeat can do for your boredom). Dinner was served on the riverfront at the rooftop bar of the FCC (Foreign Correspondents' Club) where the geckos in plentiful droves watched us from the awnings and we could watch small fishing vessels chug lazily up the river. We would need energy and a good night's rest for what the following day held for us...

At 8am we met our tour guide for the day who was to take us on a tour of Phnom Penh's dark history. Our G Adventures guide refused to come with us. "I've been once. I tried to go again but I couldn't do it," he said. Our first stop was the infamous S-21 (or Security Prison 21), formerly Tuol Svay Prey High School before it was converted in 1975 to a detention camp for the victims of the evil Pol Pot regime. In 1975, Pol Pot and his communist government came into power and the first order of business was to dismantle what they saw to be an oppressive and bourgeois classist social order. Thousands of civil servants and middle to upper-classed citizens were rounded up and taken to the prison where they were tortured for information and eventually sent to their deaths at Choeung Ek (the Killing Fields). In those days, the Pol Pot government forced the evacuation of Phnom Penh, sending hundreds of thousands of city folk into the countryside where they were forced to assimilate to their new agricultural form of life. The farming peasants represented the ideal citizen to the government; uneducated and unquestioning. Many educated citizens attempted to hide and survive among this peasant class but they faced many years of hard toil in the fields, famine and the oppressive rule of the Khmer Rouge. 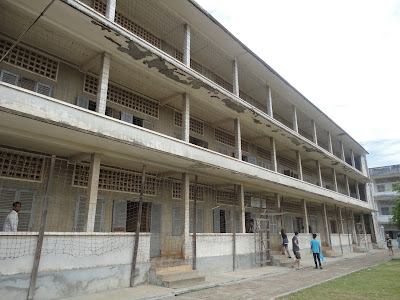 No words can describe the eerie calm that has settled over this former school. The front garden paved exquisitely to centre around the school's flagpole is now scattered with tomb stones and wooden structures used in various ways for torture. The schoolrooms were hastily converted to small prison cells no larger than a toilet cubicle. Barbwire coats the buildings' balcony areas and windows to prevent the prisoners from jumping to their deaths. Large signs (translated into English and French) declare the prison's rules to be followed by prisoners on pain of death. 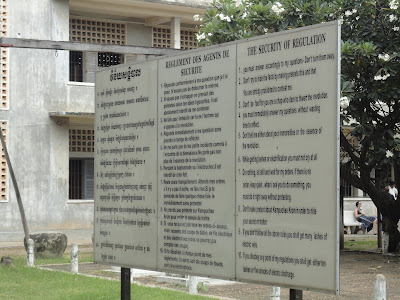 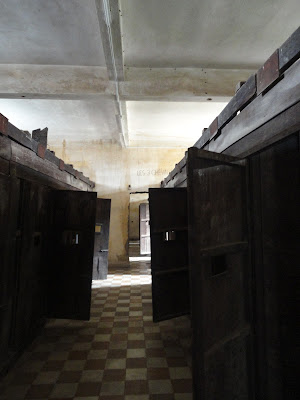 Our guide showed us through the torture rooms and explained how the prisoners were tortured. Much of what happened at S-21 was carefully documented on Pol Pot's orders. Thousands of photographs line the walls of the prison. They are all that's left of those who died under the regime, including the image of David Lloyd Scott, an Australian and one of a few foreigners to die at the Killing Fields. As our guide lead us through the prison, showing us various torture rooms, cells and  devices of torture, we concluded our visit by meeting personally with two men who were the only survivors left of this horrible place. Neither spoke English well and one of the men had sadly lost his hearing due to electrical shock torture at the prison. I will never forget their brave smiles as they greeted us individually.

Next, we headed just a little way out of town on our tour bus to the Killing Fields, the mass graves where prisoners at S-21 were sent to their deaths. Told they were being relocated to be reunited with their families, prisoners were loaded onto trucks and transported to the Fields by night. Blindfolded, they were lead to the edged of the pit that had been dug for them and told to kneel. As the morning national anthem played across the country to mask the sounds of murder, the prisoners were shot but more frequently clubbed to death (the Khmer Rouge didn't want to waste bullets) and pushed into the pit. More than 17,000 documented cases (more are suspected) of men, women and children met their end here. Today, the well-tended gardens of the Killing Fields are shadowed by a tall temple-like structure which houses the remains of Cambodians found during an excavation that took place after the Fields had been abandoned in 1979. It was decided that no further excavations would take place in order to preserve the Fields as they were. 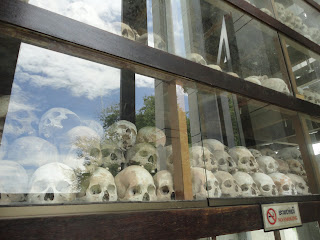 S-21 and the Killing Fields are not for the squeamish. These are not places that are at all ideal to bring children. It is (once again) highly recommended that you hire a tour guide who can thoughtfully and respectfully inform you of Phnom Penh's gruesome past. On the day that we visited the Killing Fields there has been heavy rain in previous weeks and actual bone fragments and victims clothing could be seen in the area having come to the surface of the usually packed clay. If you would like to learn more about the Khmer Rouge and Cambodia, I recommend the following good reads; Killing Fields by Christopher Hudson and First They Killed My Father by Loung Ung.

Our afternoon was spent trying desperately to lighten the atmosphere of our vacation by venturing out towards the Royal Palace and exploring its extensive grounds (appropriate clothing which covers arms, legs and cleavage required). 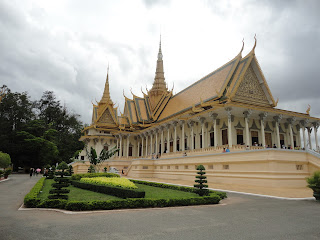 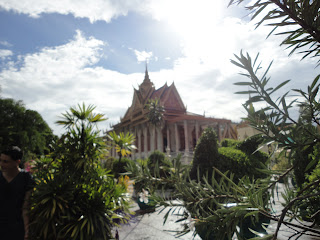 Phnom Pehn was undeniably an exciting and vibrant city. If only we had another day to visit the Russian Market or cruise the Mekong Delta river! Phnom Penh will remain in my heart not just for its fascinating history, but also its amazing food, abundant wildlife (monkeys!) and distinct culture. A word of warning however, the river front area is known for its ride-by bag snatchers on motorbikes, and always agree on the price of the tuk tuk before setting off.

The next day, we set off for the beach resort area of Sihanoukville. A 6-hour bus ride finally deposited us at the American-owned budget friendly Victory Beach Hotel and Casino. After a long day of travel, we were in need of a swim (luckily our hotel was a beachfront hotel) and a few strong cocktails.

After dinner at Serendipity Beach (which also served as the night club area) many of us spent the night roaming the beach and dancing to reggae and club beats in the various beach-side grass-roofed nightclubs.

We spent two nights in Sihanoukville drinking and dancing and at least one day chartering a boat between deserted islands where we could swim in waters warm enough to feel like a bath. It was on my second night that I had the (dis)pleasure of meeting a strange man from Bisbane, Australia. Let me explain: Talking to my tour guide one night in a bar, I discovered he sheltered a strange fetish for "gingers" which I suppose were very exotic to Southeast Asians. Spotting one in the crowd, I called out and quickly we were joined by said ginger (hereafter known as "Brisbane" because I have forgotten his name). I was delighted to find Brisbane was in fact Australian and (thinking I was in for a night of comraderey that can only be experienced between two Australians) quickly introduced myself and my other Australian friend from Canberra. I was swiftly overlooked because Brisbane only had eyes for our blonde-haired, blue-eyed, leggy American friend. Brisbane quickly got to chatting up our American friend, smoking weed with her, talking extensively of his adventures in Vietnam, Laos and Cambodia which seemed to consist of sleeping all day and drinking to excess by night. I could see that much of this beautiful country was being lost on this clod. Someone mentioned that I was visiting from Japan where I lived. "Japan?" Brisbane slurred. "That place is full of sl*ts." ...Enchante. After a while, I believe Brisbane sensed that I was deeply offended by his presence at my table and so he attempted to pull up a chair by mine for a chat, or at least he pulled up a chair next to the cloud of smoke I left in my wake as I departed. Have you ever been so embarrassed in your life to be seen with someone who could not appreciate the wonderful opportunity of cultural experience that life had bestowed on them and called themselves the same nationality that you did? I wish I could convey how mortifying it was to sit with a group of new friends from the far reaches of the globe and have someone of my own nationality approach and promptly put your home country's name to shame.

But I learnt a powerful lesson that night. I realized that arseholes exists in all countries, and really, the one at fault here was me. Because I chose to look at Brisbane and allow his poor behaviour to reflect badly upon my (admittedly impossibly pristine) image of Australia in my mind. My fear was that his actions would forever tarnish the image of Australia for my non-Australian friends. But you can't control everyone's behaviour. And part of developing a strong and healthy understanding of mine and other cultures means disregarding an individual, not disregarding the nation they may represent to you.

When I first started out on this Roam Cambodia tour, I remember sitting in a group for the introductory meeting while each of us was asked, "What do you want to get most out of this trip?" I remember answering thus because this very issue had been playing on my mind in the lead up to my trip to Southeast Asia, "I don't just want to travel for the badge, for the privilege of saying I have. I'm always try to learn and grow from all my experiences."  It was a motto I tried to carry with me persistently on my journey but Brisbane had shown me that not everyone thinks the same as me. And who am I to judge?

Join me again for the next installment of Roaming in Southeast Asia when something curious wakes me in the night and I find something foul in my hotel room in Ho Chi Minh City.
Pin It
Posted by AussieOnTheIzu at 20:54