Pin It
Today is the one year anniversary of the Tohoku Earthquake which devastated so many lives on March 11th 2011. The Blogosphere will be buzzing today and many bloggers will be making the obligatory memorial post. When I arrived in Japan, it was one week after the disaster. I have been fortunate enough to experience Japan change during the past year as a result of the earthquake. Today I would like to share my reflections with you.

I had come to Japan in 2006 for a holiday with my friend to celebrate graduation from our Bachelors degrees. I was very excited and enjoyed back-packing across most of the country in the span of 2 months. I learned a lot about the culture, the people and a lot about myself. The people were amazingly kind. I was amazed by how safe I felt in Japan. And the transport systems where infinitely more organized and convenient than my hometown. I had had such an amazing time, I was eager to return to Japan and quickly began working towards joining the JET Programme. It became my dream to be a JET and actually live in the culture which had fascinated me, deepening my understanding of that culture.

When my application to join the JET Programme in 2010 was turned down and I was placed on the reserved list (in the event someone pulled out) I was disappointed but partly relieved because it meant I had another year to work on my Masters thesis. I remained determined and decided to apply again for entry to the program in 2011.  After submitting my application in early December 2010, I received a phone call from the Japan Embassy in Melbourne who told me that a JET had dropped out of the programme and they wanted me to come to Japan right away. I was excited and threw myself into finalizing my thesis which was then in its final stages. My departure date was slated for March 13th 2011.

On Friday, March 11th, I was enjoying after-work/farewell drinks with friends and co-workers in Adelaide. It was about 5pm. I was blissfully unaware of what was going on in Japan. A couple of hours later, a friend arrived to wish me well and as I greeted her, she said, "Have you heard what is going on in Japan right now?" "No. What?" "There has been a massive earthquake!" At first, I blew it off, thinking, Well, they have earthquakes all the time in Japan. She probably just doesn't understand! But something was niggling in the back of my mind.

When I got home that night, I turned on the news to find out about this 'massive earthquake.' I remember one of the first images I saw of the Tohoku Earthquake was the vast debris that had been swept out to sea. Some of it burning. The newsreader said it was likely people were trapped in the debris. I stayed up for hours watching those images. Finally, I crawled into bed but it was not a restful sleep.

The Embassy called me the next morning and asked me what I wanted to do. They were anxious because they had invested a lot in me. They had made all the travel arrangements and my school in Japan was expecting me. At that time, there was a serious fear that the Fukushima power plant was going to blow and that most of Japan would be showered with toxic materials. Basic infrastructure was damaged: fewer trains were running, some lines not at all, to help save power. Black-outs were being enforced in much of mainland Japan to help conserve energy. I couldn't be sure that I would even be able to get form the airport to my placement. The Embassy offered to delay my departure until March 22nd, just until things "settled down." I had already quit my job by that point. There was nothing for me in Australia. I took the plunge and decided to follow my dream.

The following week frazzled my mother's nerves more than my own. She was terrified of sending me off to Japan. I spent most of my time glued to the cable news networks for up-to-date information on Fukushima. I followed it closely, fearful that the plant would meltdown and my JET dreams would blow to smithereens with it. The images of the devastated areas being fed back to Australia were staggering. To think that this could happen in my beloved Japan! Suddenly, in an instant, hundreds of thousands were without homes, cold, starving, and missing loved ones. How could I justify occupying a place (stretching the resources even further) in a society in which so much had been lost?

Within hours of landing in Nagoya on March 23rd, I was on a shinkansen heading towards Shizuoka. I was exhausted from the flight but still a little giddy with excitement. I was here! My dream was coming true! I was playing my ipod, not loudly, minding my own business, grinning like an idiot. A salary man boarded the shinkansen and as he made his way to his seat, walked past my own and noticed me. In his eyes, he must have seen a tourist, grinning stupidly and insensitively enjoying themselves, failing to understand the gravity of situation with which the country was faced. He sneered at me and took his seat behind my own. That was weird, I thought. Not five minutes later, he grabbed my chair and shook it roughly. What the...? I thought. Turning to look at him, I saw anger blazing in his eyes. "Too loud! You are being too loud!" he shouted at me in Japanese. Many people turned to look at him. I was so shocked; I hadn't been making a sound. I could only assume he thought my ipod was too loud, which it wasn't. "Sorry," I murmured and turned it off anyway.

I was a bit shaken by the incident. I had literally been in Japan for a couple of hours and already strangers were shouting at me. Luckily I understood some Japanese and could understand what he was shouting at me. Something else I had noticed while in Japan previously was that there was an eagerness to speak to foreigners in English (which most Japanese have at least a small grasp of). Perhaps there is a presumption that we cannot speak Japanese or they really, really want to practice their English. So it struck me as odd that he had chosen the Japanese language when he decided to yell at me. Like he was emphasizing my otherness, how unwelcome I was. The incident struck me as very different from the Japan I had visited before. The Japanese people I knew were ALWAYS polite, sometimes overly so.  Maybe you have experienced the uncomfortable-ness of a Japanese colleague apologizing profusely for merely brushing against you? I have. They do not believe in disturbing other people. They would never admonish you or let you know you are annoying. There are no public displays of frustration, for this would be a loss of face to the Japanese. So you can understand this situation came as a bit of a shock to my already exhausted system that day in March. I saw a raw side of the Japanese people. I saw that many, even people who didn't live in Tohoku, were hurting. 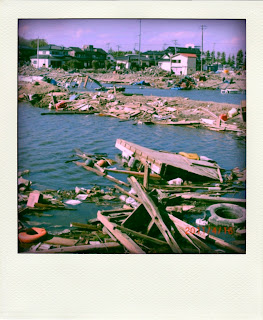 Things didn't get much better for me and for Japan. A sullen, fearful state seemed to have descended on the nation. While my new school was kind and accommodating while I was trying to adjust to living in a new country, I was trying not to rely on them too much. They didn't need me adding to their already taxed stress levels. I had been shipped off to Japan by myself, an anomaly in the JET Programme's procedures, and received no orientation (pre or post-arrival) or training. It seems the people at CLAIR were inundated at the time organizing travel for JETs who wanted to go home and other issues revolving around the disaster. So no steps were taken on their end to ensure my cultural adjustment (my understanding is that most JETs receive help and counseling during orientation to this effect). After feeling somewhat neglected, completely alone, and unprepared for the overwhelming effects of moving to Japan, I wrote a letter of complaint to the people at JET. I wont go into it here (maybe a later post), but sometimes I reflect on it and think I was acting out of hurt and a sense of entitlement.

The Australian government was still warning Australians in Japan not to travel even to Tokyo months after the disaster, warning of aftershocks, delays in transport and radiation dangers. Throughout it all, the Japanese people (well most of them, train guy doesn't count) remained stoic and positive. People volunteered their free time to stand on street corners asking for charity donations. And let me tell you, they had every corner in every city I visited covered. Add campaigns ran on the television encouraging hope and togetherness ("頑張れ、日本!" Japan, do your best!) I heard about many areas in Tohoku suddenly being inundated with volunteers and donations of food and money; so much so, they had to turn some away. It was inspiring.

Today, one year on, the Fukushima power plant is no longer a serious threat but now Japan's people have other pressing issues to deal with, such as the disposal of radioactive materials that are a result of the disaster, the viability of nuclear power and rebuilding. Recently, Shizuoka was earmarked to be a burning site for this radioactive material, sparking protests and bringing the danger one step closer to the place I live. More and more I am seeing advertisements on the television for eco products: cars, air conditioning units, energy-saving lightbulbs. etc. It seems the disaster opened many eyes to the importance of protecting and respecting our environment. Sometimes, when they feel like it, my students will write journal entries about what happened. It seems to still haunt many people. 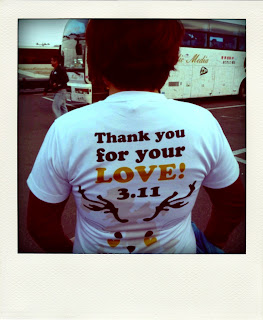 While I did experience some cracks in the surface, the endurance of the Japanese was and is just amazing. Japan is a changed place to the Japan I visited in 2006, at least in small ways. Change, I feel, is never a (completely) bad thing. Sure it can be terrifying, and it can make you frustrated (like seeing a 'tourist' on a shinkansen and thinking tourism should not be a priority right now) and vulnerable (like moving to a new country and struggling to adjust, feeling entitled to some help and kindness), and sometimes you react badly. They say time lends perspective. When you have a massive catalyst, and you reflect upon the time after that catalyst, you might find some moments you are proud of, and others not so much. But I think most people will be able to look back and appreciate how much they have learned and experienced.  Maybe that makes it worth it. Train guy, I'm dedicating this one to you.