T.G.I.F.: Hinamatsuri and much more!

Pin It
Here is your weekend event calendar round-up for 3rd and 4th of March! This weekend we have the national Hinamatsuri (Doll Festival) holiday and all kinds of events going on. Find out what is happening in Shizuoka after the jump...
There are a few things to report for this T.G.I.F. post. First, there will be a free piano concert and lecture on March 3 (Saturday) at Axis Katsuragi Multipurpose Hall (アクシスかつらぎ多目的ホール）. Doors open at 6.30 pm, curtain time is 7:00 pm. Admission is free and there is no entry restrictions based on age. In the words of the organizers, "You can enjoy real music free for anyone from children to adults." The event is officially called 'An Evening of Axis - Part 83 Piano Solo' (アクシスのタベPart83~ピアノソロ编~). For more information, contact Axis Katsuragi at 055-948-0225 (from within Japan).
Also this weekend, Atami will be hosting the 68th annual Atami Plum Festival on both Saturday and Sunday at the Atami Plum Garden (300yen entry fee). On Sunday, there will be concerts, theatrical displays and geishas will be in attendance. Atami can be reached on both the JR Tokai local line and the JR Tokai Shinkansen line. The garden is just a 10-minute walk from the JR Kinomiya Station (one stop away from Atami on the JR Ito Line, just follow the crowds).
Gotemba will be marking the end of winter and the beginning of spring with one of its very last night time 'winter illumination' displays. Winter illuminations are an incredibly popular pasttime for the Japanese, allowing couples to bask in the warm glow of fairy lights as they enjoy an evening stroll. Why not check out this spectacular phenomenon before they vanish completely  before spring? The event will be held at Kami Mountain. Two adults can be admitted for the price of one (1000yen). A free shuttle bus runs between JR Iwanami Station and the location (only takes 5 mins). Iwanami Station can be reached from Numazu on the JR Gotemba Line. More details (and images) can be found here (Japanese only). 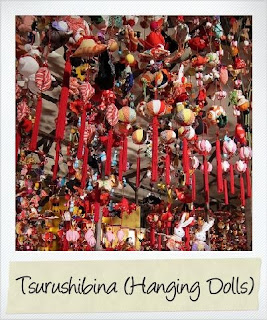 Hinamatsuri is also on March 3. On this national holiday in Japan, also known as Girls' Day, families display small dolls in their homes (called “hina-ningyo”). Often intricately designed in the image of the Emperor and Empress, these dolls are usually handed down through the family for generations. The dolls are supposed to embody the family's hopes for their daughter's future. Straw dolls are used to attract evil spirits which become trapped within the dolls which are then burned or traditionally floated down a river to dispense of the demons. Doll displays must be taken down and burnings/floatings must take place immediately and no later than March 4th or it is said bad luck will be brought down upon the daughter and her love life.
Inatori on the Izu Peninsula is famous for its Hinamatsuri celebrations. I remember last year the Inatori celebrations made national news. Hanging dolls (called "Tsurushibina") are displayed. The festival runs from early February to late March. There is a list here (translated from Japanese using Google Translate) of all the hot spots for viewing the hanging dolls. There is also a map here of all these locations (the map is in Japanese but you can easily match up the kanji from the map with the kanji on aforementioned the list). Izu Inatori Station can be reached by taking the Limited Express Odoriko train from Atami, or taking the JR Ito Line from Atami and changing to the Izu Kyuko Line at Ito.
Inatori Onsen (稲取温泉) is hosting an amazing display of these dolls. Inatori Onsen can be reached by taking a taxi from Izu Inatori Station or alternatively, you can walk south of the station for 15 minutes (map reference here). You can view a pamphlet for the event with a map (in Japanese) here.
What are you doing this weekend?
Image courtesy of Yuya Tamai (Creative Commons, Flickr).
Pin It
Posted by AussieOnTheIzu at 11:27